The Societal Whirl of Britons Before Waterloo

Most people familiar with Waterloo know that the battle famously “interrupted” the Duchess of Richmond’s ball. But you might be surprised to know that there was a very full and gay societal life in Brussels in the year leading up to the battle.

After the Treaty of Fontainebleau in 1814, which sent Napoleon packing to Elba, Europe suddenly opened up to British families seeking not only the spectacle of the mess Napoleon had left in his wake, but also cheap properties where they could live comfortably, but much more inexpensively. The war had rendered many families poor. Add to that the growing mania of gambling that pervaded aristocratic society in the late 17th and early 18th centuries, and you have many families seeking to run from their creditors and carve out a new life outside of England, for debt was both a stigma, as well as something that could land one in gaol.

Brussels, part of what was then called the United Kingdom of the Netherlands, was an ideal location for many families to settle. It wasn’t so far from the coast of France that traveling there would render an already fortuneless family destitute, and there was a coterie of other English aristos, including some officers and their wives who chose to remain after Fontainebleau, that they might all socialize together…a sort of mini-London. Sure enough, as Nick Foulkes describes in his book Dancing Into Battle: A Social History of the Battle of Waterloo, “within a couple of months [of Fontainebleau] Belgium had become like a Jane Austen novel that had gone on a Continental holiday.”

Newly arrived families wrote to their relatives back home about the sharp difference in the cost of living, as well as the lush landscape. Lady Caroline Capel penned a note to her mama in June 1814 stating that the cost of most everything—from mutton to dancing lessons to shoes and silk stockings—was easily half of what she’d paid in England. And men, particularly those from agricultural areas in England, marveled at the rich fields covered with acres and acres of thick wheat, rye, and corn. To them, the United Netherlands was a land of plenty—in both food and drink. 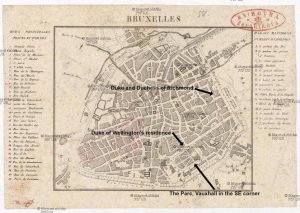 The town itself was charming. Encircled by ancient defensive walls, there was a park in the central part of town where individuals could see and be seen, and where the British Army, garrisoned nearby, paraded every morning to the sound of the military band. Homes lined the park like many of the squares in London, and it was well-attended by the social elite. In a corner of the park was an area called “Vauxhall,” which offered a small theater, fireworks, and many of the same entertainments that one would find in the original Vauxhall in London.

Clubs and organizations were created by the new arrivals, including “literary clubs,” where men could meet, read the papers, socialize, and have a drink and a cheap meal. Unbeknownst to some (including the wives of members), many of these societies actually doubled as gaming hells.

For the sporting set, race meetings were established by men who had brought their racehorses to the Continent. Participants included the Prince of Orange, one of Wellington’s aide-de-camps, and the Duke of Richmond. Some of the results from these races even landed in the London papers. Men who enjoyed the hunt could participate in shooting parties and wolf hunting in the Ardennes, a picturesque area southeast of Brussels, with some of the hunts lasting as long as a fortnight.

Just as social stratification and scandal affected London society, it also had its place in Brussels society. As more and more Brits arrived in Brussels, they sorted themselves into the same social groups as they had maintained in England, and generally socialized only with each other. “The Ladies in the Park” was a moniker given to a group of women from the very upper crust who only visited with each other. Many ladies wrote to their relatives about “Bruxelles stories,” which were scandalous or untrue tidbits of gossip.

The locals had much to adjust to when the Brits arrived. Generally, the social day for Bruxellois families ran earlier…up earlier, a déjuner à la fourchette (luncheon) in the mid-afternoon, and parties and balls that started around 8 p.m. and ended near 1 a.m. Contrast that to the typical British aristocratic timetable of waking at noon and breakfasting, eating dinner around 8-9 p.m., heading out to events at 10 or 11 p.m., and returning home in the wee hours of the morning. Sometimes, the differences between the British and Belgians could lead to conflict or trouble. As Foulkes quotes one of Lady Capel’s letters in his book:

The inhabitants of this Town have now declared open warfare with the English residing here – The Ladies abuse every thing we wear & every thing we do – The Gentlemen are not so severe, & declare that their Countrywomen are burning with spite and envy and jealousy at the superiority of the Englishwomen – this as you may suppose does not mend matters and it really is becoming entertaining. [Foulkes, p. 14, quoting The Capel Letters, p. 52]

Another shock to the native Bruxellois was the large quantity of alcohol consumed by Britons (and, of course, the resulting drunken behavior). During the Regency, excessive drinking was a national pastime. Over 50,000 public houses were open all day in England, and men and women drank everything from expensive ports and sherries to cheap gin. 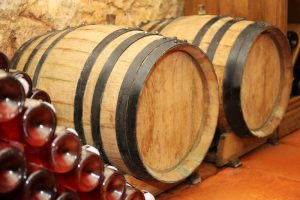 To some, one was only considered a real man if he could consume six bottles of port a day. In Belgium, much to the delight of aristos and soldiers alike, drink was abundant and cheap. Hollands, or strong spirits, were available to infantrymen for eight pence a quart at distillery strength. The low cost of living allowed men to plow more money into drink, too. And because the soldiers had no fighting yet to occupy them, they filled their free time with drinking. While a generous portion of spirits was part of each soldier’s ration, it was never enough.

In March 1815, roughly a year after the first families flocked to Brussels, Napoleon escaped Elba, thrusting England back into war with France. Many aristos who had taken up residence in Paris were forced to flee upon Napoleon’s return to the Continent, in some cases leaving with nothing more than the clothes on their backs. Some of them settled in or around Brussels, while others headed to Antwerp. In early May, a month-and-a-half after Napoleon’s arrival in Paris, Wellington established himself in Brussels in a large house on the corner of the park on the rue de la Mongagne du Park. While one might assume that the arrival of Wellington would cause concern among the haut ton, many regarded it as the beginning of a series of fun and entertainment. This is because, as Foulkes says, “The very physical presence of the Duke had a hugely reassuring effect [on the local British population]. Officers and those they commanded drew inspiration from their chief….” The gay social life in Brussels continued unabated.

Because many of the events being offered were free to officers, or half-price, as was the case with the theatre, a large number participated in the evening events in Brussels. Naturally, men and drink typically led to unsavory outcomes, and after a short time, the officers were ordered to remain with their regiments. However, if the officers couldn’t come to Brussels, then the Brits would go to them, partaking of parties, meals, picnics, and (more) alcohol. When the cavalry regiments arrived, officers engaged in regular inter-regimental races, typically followed by dinner and drink, with drunken riders returning home after dark, sometimes falling off their horse in the process. It was not unheard of for a horse to return to its stable without its rider. Gambling, fighting, racing, shooting…all were the activities of Wellington’s men, along with the local haut ton, when they weren’t preparing for battle in the month leading up to Waterloo.

In fact, it is suggested that the Duke had much to do with this aura of partygoing in the month leading up to Waterloo in particular. Napoleon might have been the face of France, but Wellington was the face of Britain, and his stiff upper lip and apparent lack of concern for the threat that Napoleon presented might have been deliberate on his part to both unsettle Napoleon, as well as shore up the courage of his fellow officers and soldiers.

This might explain why Wellington participated in (and gave) so many balls and attended a large number of soirees, dinners, and other social events almost every night. British society ladies assisted by participating in what Foulkes called “competitive party-giving,” adding that it “created a social smokescreen and fostered an air of unreal calm, as if the salons of Mayfair had been transported to the edge of the battlefield.” 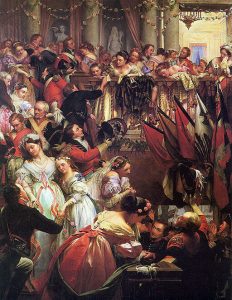 Indeed, on the evening of 15 June, the night before troops marched to the battle of Quatre Bras, the Duke famously made an appearance at the Duchess of Richmond’s ball, hoping that his presence there would alleviate public anxiety. But even on this evening, he was unable to pass off his insouciance, for reveille could be heard outside, along with the march of soldiers. Instead of being a gay and fanciful evening, it was somber, with many of the guests saying goodbye to each other for the very last time.

In the hours and days that followed, many expats left Brussels for Antwerp, Ostend, and other towns away from France and the invading French army, sure that fighting would continue for months or years.

When the battle ended and word of Wellington’s victory reached Brussels, curious people visited the site of the conflict, horrified at what they saw. Women and ladies who had hosted parties in the months and days leading up to Waterloo now found themselves in the role of caretaker and nurse as the wounded were brought back to Brussels. In effect, the social life of Brussels stopped on the eve of the Duchess’s ball. So many of the officers that had participated in the gaiety were either dead or wounded, and those who survived were obligated to chase Napoleon’s fleeing army to Paris. Even more sadly, many of the ladies of Brussels would soon learn that their husbands or lovers had perished in the conflict. While rumors abounded that Brussels would once again achieve its social pinnacle, that was not to be, for after the capture of Napoleon, Paris and Vienna would become the new social hubs for Brits in Europe.

Foulkes, Nick. Dancing Into Battle: A Social History of the Battle of Waterloo. London: Weidenfeld & Nicolson, 2006.

Site by Breton IT Solutions, LLC.